This is my latest effort to response to MirandaFave Homework challenge of a series of thirty Trek verse letters.  Anyway this is my fifth challenge answer. Which is a letter from one of my character to their dreams. Which I’ve got to say seems a weird thing to write a letter to but let see where this one goes.

So without further ado, Here my AOS or NuTrek Version of James T. Kirk writing to his dreams.

You might wonder why I’m writing you this letter, given this isn’t my normal type of thing but Bones reckon it might do me some good, given my recent lack of sleep to work out what is playing on my mind by studying what my dreams are about.

I don’t have the heart to tell him that the reason I’m not sleeping is the nightmares. I’m the Captain of the Federation’s flagship, and I can’t afford to be weak in front of the crew and especially not in front of Bones.

It just of late my dreams have started to featured friends and family in unfamiliar settings and I’m worried that it might some kind of delay leak from when I shared a mind meld with the older Spock from the pre-Nero timeline.

For some of them I can cope with it, as all I see is myself sitting in the centre seat on the bridge of the Enterprise but it not my bridge. The crew are all there and are the same and yet they’re not. They all seem to be doing the same sort of things but strangely Scotty has black hair not red.

Those dreams are bizarre but not bothersome, it’s the other ones, the ones where I see that other me facing hardships that are getting to me.

The first bothersome dream is the one is the one that seems to echo my recent trip to the heart of the warp core. Where I’m looking out from inside the chamber again but rather than see Spock like I did. I see an older me having to watching me die and unable to help, struggling to say the words that need saying. It hurts but the question that dream leaves me when I wake is how can that be? Did McCoy use Khan Blood to bring Spock back like he did for me or did some other miracle save the other Spock life?

Then there is the one when I standing on a hill of a burning planet and with the crew as we watched the Enterprise burn up in the atmosphere and I hear McCoy voice telling that other me, I’ve done what I’ve always done turn death into a fighting chance to live. Yet despite those words all I can feel is pain and despair as my true home burns up leaving a trail of fire across the sky.

How did they get out of that situation and how was losing the ship, turning death into a fight chance to live? I wish I could find the other Spock to ask him more of that incident perhaps with a little foreknowledge I could save the ship this time around.

The most haunting dream is the one where I’m Spock and I’m sitting at Thanksgiving dinner in the Kirk family farm and Mum is fussing over Peter while Bones and I help her in the Kitchen to prepare the food, despite the age on that other Kirk face, Mum’s face somehow looks a lot less weary than I’ve every recall seeing. Then my (Spock’s) eyes fall on a family portrait that shows Mum and Dad attending my alternative self’s Starfleet graduation ceremony, and I feel envious of that Kirk.

Then I see next to it a picture of Sam with a black border and feel Spock’s pain as I recall Deneva, then the dream changes and I can see an younger Kirk kneeling over the dead body of Sam, the clear look of pain on that Kirk faces as he tries to carry on. 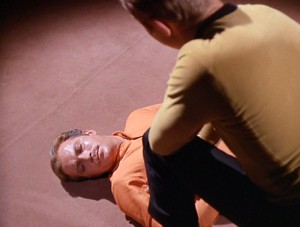 It’s part of the reason I changed the Enterprise patrol route to be closer to Deneva, when we were in that sector last month. 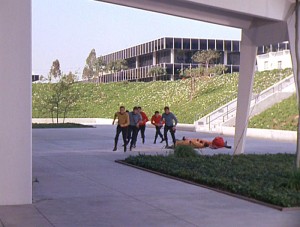 Hence the reason we got to Deneva in the nick of time to save Sam and some of the other colonists it shows that with a little foreknowledge, I can fulfil my promise to Christopher Pike and do better. Still I wonder if by reacting to the dream and saving Sam what other changes I’ve set into flow for this timeline. The worse thing is I can’t shake the feeling that without Dad I’ve hurt Mum in ways that I can’t explain and I don’t know how to fix that, as some flowers on Mothering Sunday and the Federation day of the women, doesn’t seem enough, I can only hope by saving Sam and his family that will take some of the weight off her shoulders.

The final bothersome dream is the one that wakes me and leaves me with questions I don’t know how to tackle, It starts with me, as Spock, standing in a hospital with Bones and I enter a private room, when I enter I see an older Carol, I mean Doctor Marcus sleeping in a bed with that other older me holding her hand, but it obvious from the medical read outs and her half frozen face that she has had a serious stroke and the outlook is very bleak.

I find myself in Spock’s voice saying I’m sorry Jim, but we need to go now, if the peace treaty is to happen; we much reach the rendezvous on time to greet their Flagship. I can see the pain look on that other Kirk Face as he nods his understanding stands and put Carol hand back on the bed. As we leave I see the look of regret cross that other James Kirk face. What did he do or not do in relation to Carol that leaves him with such regrets, can I find an alternative and better path in this new timeline and what is it?

Why do you torment me so dreams? I do want to do better to keep my promise to Christopher and yet I’m left wondering what butterfly paths have already been change beyond any power to put right and with what I lost without Dad in my life, can I still be the hero that the alternative Spock and Indeed Nero said I was originally destiny to be?

So dreams please be kind this night and just give me a simply ‘save the day’ dream, and stop with the alternative timeline memories because I don’t want to play the second guessing game anymore.

Feedback is welcome as always 😉 Till next time Trek safe this day.