This is my latest effort to response to MirandaFave Homework challenge of a series of thirty Trek verse letters.  Anyway this is my fourth challenge attempt a letter from one of my character to one of their siblings.

After a bit of inner debate, I was going to do one from Schick the Xindi-Insectoid as she has lots of siblings but then I realize a letter full of clicks wouldn’t work, nor doing it in English, as it would spoil the fun of the character. 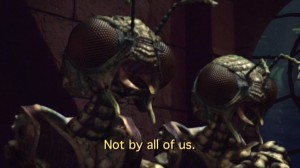 So Instead here is Captain Douglas Gorrim of the Ariane NX-04 letter to one of his Brothers.

OPENED BY THE EARTH WAR-OFFICE

Cheers bro for the update in your recent letter, sorry I couldn’t respond sooner but the Ariane had a minor run in with some Romulan Warbirds; but on the bright side you can tell Katie to sleep safe and not to worry uncle Douglas is keeping them away.

I’ve got to admit I’ve current nursing a few bruises as well in the aftermath but nothing you need to worry mum about.

Well while I’m recovering and overseeing the repairs of the Ariane at this Andorian shipyard, I’m getting a little chance to learn more about our Andorian allies. From their various music styles to dance to their entertainment arts. Certainly I’m learning to appreciated Andorian Brandy, if the fates are kind I’ll bring you a bottle back as I’m sure Brigitte and you would appreciate on a quiet night, once you’ve put the girls to bed.

Tell Gabrielle that the crew and I appreciated her Kinder-garden class drawings they were good for ship morale, though I’m not sure how Naurr would take being called my big kitty chef to his face though knowing him maybe he would see the funny side.

From recent family letters I get the feeling that Sis and Junior have fallen out again, Any idea what was the cause was this time? Has she dye her head an interesting colour again?

Anyway I’ve got to go, but here hoping the war is over by Christmas and I can catch up with you and your extended family and maybe I’ll be able to remembers a bit of German this time.