Sorry Real Life has kept me from bloging for a while, but I’m trying to get my writinghead back in the right zone. So I shall do the next Trek Letter.

Which is writing a letter from one of yourcharacter to someone they wish there could meet. Once again I struggle with this prompt, for once not to see how to translate this to the Trek setting because while Roddenberry humans still have heroes they also have the advent of Holodeck which means they can meet a simulation of there heroes anytime they wish. While it might be limited meeting I just feel that it would reduce the wish to write such letters to them.

So I had to go back to the earlier trek eras but still no ideas jump out for any of my normal characters from these eras. Hence the recent quiet blog period, which I try to find the letter.

Then this last fortnight (or so) two things happened that give me an idea the first as per the G&T show recommendation I did indeed watch the ‘Prelude to Axanar’ video on Youtube. Which I do recommend you track down and watch on Youtube if you haven’t already seen it. (I would embedit here but my old compute seem to hate embedding Youtube just don’t ask me why).

The second was while browsing mylocalcomic book store I spotted a discount version (due to minor cover damage) of Keith DeCandido “The Klingon Art of War” which again I felt might help me with inspiration after reading it in a single sitting, I felt it was indeed a good buy.

Having enjoying both of these differenttrek items call up to my mind Lily Klingon equal and antagonist (or at least she will be when I get round to writing more of Lilly USS Argonaut & Axanar voyages) B’sireyr. However in the meantime B’sireyr made a guest appearance in Weekly Free WriteWeek128“gettingSchooled” readable at:-

Now a Klingon wishing to meet a honourable enemy once final time on the field of Battle rather than waste away was the seed for this week blog letter.

For the attention of Lily of Earth,

From: B’sireyr, House of Ruv

I know you were not expecting this letter and indeed given your death a couple of decades ago I don’t believe you would waste drinking time in the human version of Sto’ Vo’ Kor in reading the musing of your old blood enemy.

However as I lay here in my bed, no longer able to rise with the sun and fight.I know death comes closer with it bat’ leth held firmly to end my life, for I see it standing at the end of my bed. So before I ask my son Mukor to help me performmy last duty of Mauk-to’Vor. I intend to write this final letter to the one enemy who I would happily accept losing my life to on the field of battle, for you were indeed such a worthy enemy, something I am not sure that I appreciated during our first few engagements.

However in my many time facing you as a enemy I came to realise that you always help me to understand each of the nine core precept of qeS’a better and in particular the fifth precept: reveal your true self in combat. 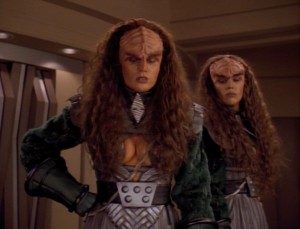 For in our various combats in space and on alien worlds around the quadrant I came to realise I was to often controlled by my temper and didn’t value honour appropriately. While you also had awarrioress temper you could cage it long enough to see the bigger picture and pick your enemies and places of battle better than I and still hold true to your strange Federation believes.

However it was upon the ice fields of Kres’gar where you maroon us both, after you rammed your dying ship into mine, thus proving the value of the second precept, strike quickly or strike not. Then during our hellish journeys off those accursed ice fields we both fall manytimes to each other and the elements but in the words of Kahless when he explained the ninth precept, die standing up, “If you fall down eight times, you should get up nine times.” So did we both against the odds.

How I laugh with joy when I heard that you had fought your way off Kres’gar as well, for I look forward to the next opportunity to rejoin our constant battle and try to earn your head on my bat’leth to seal my most worthwhile victory over my favourite enemy.

Yet for all the later grand battles of the four-year war that we both fought in, we did not directly cross bat’leth again till after the war was over but I did hear of your part in the Federation victory at Edina Libirous. 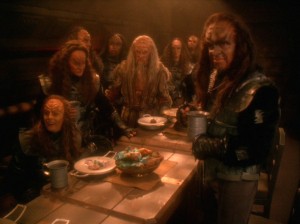 Indeed the last time we meet in the fleshwas during the joint negotiations with the Rakitherians. Where we couldn’t fight directly so I challenge you to the Klingon strategize game of ‘Klin Zha‘ that youaccepted and over several alien drinks we gamed till the K’zinti assassin made the mistake of interrupting us. Thus reveal the truth of who was raiding the Rakitherians.

We never did meet again but I did hear of your death in battle with the legendary James Kirk at that Starfleet retirement home. How I envy you that a death in battle for the old warrioress while fighting alongside one of the greatest warriors of your race and maybe the galaxy has ever seen. Rather than pass away a broken old woman in her daughter guest bed. 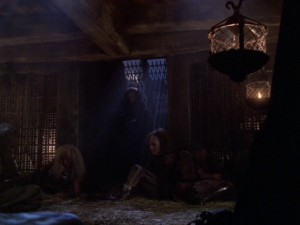 I can now hear the sea washing up against the barge of dead and know my battles of this live are done and I have no more time to tell old tales. Perhaps maybe in Sto’vo’kor I will have the chance to meet you again and tell you of the mighty Khitomer Accords between our people that has the whole galaxy shaking or at least speak honestly and openly of my respect for you my warrior sister of the Federation.