This week’s blog prompt from Admiral Jespah is about small conflicts.

Stories need conflict. Otherwise, there’s not much to tell. But war, torture, divorce, bullying, and fights for survival aren’t the only conflicts out there. Some are just little things, like when someone doesn’t put the seat down leave the seat up.

So my character’s blog entry this time is to be about a conflict that’s anything but earth shattering.

We have completed our operational trials and I can report bar a few minor non-operational matters, we are now space worthy and ready for active service.

Well after a week to test the patience of a saint the Excalibur has completed her space-worthy trials and Starfleet Command has sign off on our fit for active service certificate.

However my biggest two biggest irritations remain, the turbo lift door on the bridge make a nerve-aching shriek ever time it opens. Seriously it sets everybody teeth on edge included the bridge crew who don’t have teeth.

I’ve had Chief Engineer Tulansen increase the lubrication around the door but to no avail. That door still shrieks like the proverbial banshee when it opens thus disrupting everybody who’s on the bridge. 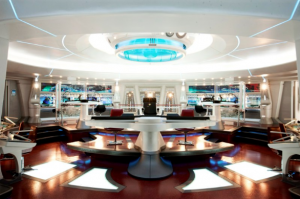 Tulansen has ensured me that the shriek is just because the door is brand new and once we’ve worn it in, the noise will stop. I’m not hundred percent convinced by that despite the tricorder readings he shown me. I’m do wonder if there is a hidden defect in the door that we won’t find till we have a retrofit stop over in a year or two time.

The other thing that has become a serious irritation is the crew’s new random and irrational belief that we have a guardian angel onboard. As far as I can tell it started on the lower decks and is spreading upwards. From what my command crew can gather, it seems that  a couple of crewmen have reported seeing a strange humanoid women with red hair wearing a white dress sometimes with wings wondering the lower decks and preventing accidents or leading crewmembers to fault ship components.

We had another vision this morning from ‘D’ deck, so I asked Kallachit as my Security Chief to run a complete security sweep for a shape-shifter alien intruder. However after three shifts and a couple of false alarms, the senior officers and I have concluded we don’t have an unauthorized shapeshifter onboard but there is something behind this string of sightings.

Thus I have asked Doctor Joy Southcott to run the whole crew bloods through a tox-screen to look for any sign of foreign substances. That might explain these strange hallucinations. To date she has had no luck in finding a medical cause for these visions. So I’ve also asked Engineer Tulansen to double check the environmental controls but he has ensured me that they’re not report anything wrong with ship atmosphere nor are hand tricorders reporting anything different from the main controls.

I want to believe my X/O Commander Schick when she says it’s just new ship nerves and just like the bridge turbo-lift door noise, once we‘ve broke the ship in, the sightings will stop.

I want to believe that, these little blips are just nothing and when we get the ship run in they will stop and the Excalibur will meaningful contributing to the continual success of the United Federation of Planets.

Because as I a Xindi- Reptilian commanded this human built constitution class starship through federation space, I do dream that we’ll be the ones who finally unify the five surviving races of the Xindi together beneath one banner.

But to do that I need my crew to stop seeing mythical creatures on the lower decks, because after being mislead by the sphere-builders the last thing any Xindi want to hear, is anything to do with believe in supernatural beings.

Maybe next week things will be better once we get our real operational orders, Like a lot of the crew here I’m hoping for a five year exploration mission and not border dog patrol reinforcement.

Well there you go.

Comments are welcome as always.

All Photo’s are from trekcore library.

As always till next time keep to the warp speed limit but I wish you safe trekking.