Well it time to Blog like a Boss only the daily prompt seems to be missing in action.

So rather than lose out I shall do the next Trek Letter prompt.

Which is writing a letter from one of your character to their favourite Internet friend.

Now technically there isn’t any sign that the federation has a pan-Federation Internet, so I guess the close I’m going to get is a sort of Pen pal by electronic sub-space e-mail. Now this does seem to call for a Chef Naurr Letter.

So without further ado, here is the Cajun Caitian writing to his Best Friend Philippe Rivette.

I’ve just received your last letter and the enclose pictures.

The Cajun part of Earth does indeed appear to be all that you described and much more.

I’m looking forward to visiting it and trying the authentic cooking to see how well I’ve done over the years.

I note from your new address that you serving on Archer new Warp 7 ship, I hear they bigger and better equipped, with more crew. I do hope you make lots of new friends but not so many you forget your old ones.

I believe Captain Gorrim feels a little pass over at the moment as Ariane remains the last NX Cruiser in active service and we are reduced to Coalition border patrol. 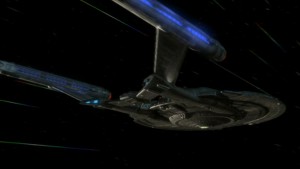 He was making some remark about being reduced from scientist and warrior to Starfleet border dog, which I don’t understand as Captain Archer always treats his dog well, do you have any idea what the Captain Gorrim is going on about?

Well I don’t have a lot of news with the Romulan war finally over and us just patrolling Coalition borders. We’re still short staff as Starfleet has assigned the best people to the new Warp Seven ships. I mean Cassandra left to join Captain Erika on the Excalibur last week, which mean of the senior crew you knew only the Captain remains, he had to draft in MACO officers to fill some posts as we not getting new people from command.

I’ve also handed in my notice to the Captain, so my service to Starfleet will end when we get to Earth next month. Captain Gorrim appeared to accept it in good grace but I could see in his eyes made him very sad. I told him I’m going to tour for a while, make my way off to Lafa II, When Lili Beckett offer me a job in her Restaurant, I hope to build up enough money to go home to Cait and start my own Restaurant back home.

Writing of which reminds me I got visited Lili on Lafa II again last fortnight and see her growing clan, I also ran into Commander Reed. I did then Prako Gambaro that they liked.

O but we did get the sign plates in all four languages of the coalition to replace all our old Telarite ones at long last. So means we’ve finally work out what some of the more obscure signs mean. Also with our Coalition exchange program I’m now getting plenty of practice to cook Vulcan, Telarite and Andorian food I shall be able to cook something for everybody.

Other than that is all quiet here on the Ariane, I shall see you next Month.

Historical reference, this letter is confirmed as being part of the last transmission Starfleet received from the Ariane NX-04. Which disappearance remains unexplained even in the 25th Century.

Feedback is welcome as always 😉 Till next time, Trek safe this day.