So we entered week five of the Twelve Trials of Triskelion 2014 Challenges which is the Daily Prompt challenge week and the first prompt is: – 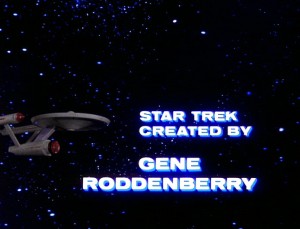 Well then in the beginning phase takes me back to The Original Series and that starts with The Cage and the Pike Era.   This is one of the strange mysteries and great what if moments of Trek lore the Missing era of Christopher Pike, as seen just in “The Cage” and revisited in “The Menagerie”.

I always kind of hope that we would get more books set in this Era, but sadly we seem to only get the rare gem and they usually seem to be Spock-centric. Thought i can point to some good work on Ad Astra especially by SLWalker. In truth for me we don’t get to see a lot of the Pike/No.1/Yeoman Colt Trinity, which I think had so much potential. 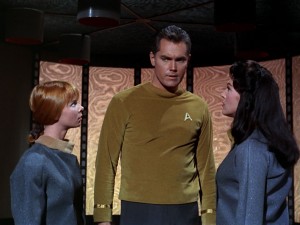 So to end this blog here is a short Don’t Edit IT To Death Just Write (DEITDJW) piece from the Pike Era (hence the grammar and spelling errors). 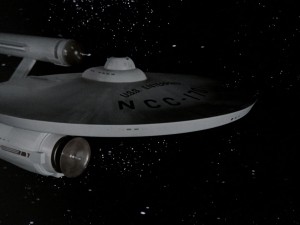 Pike pick up his queens bishop and then move it up to attack level two. His opponent his X/O the cool and efficient women know by everybody as Number One just raised her eyebrows in minor surprise at the move.   She studied the 3D Chessboard again and moved her index finger up to her lips.

“Number One, don’t pretend that you didn’t see that move coming,” said Pike as he sipped his coffee.   She pick up her Rook and move it from level one to level three.

“Check, no I was expecting a better move from you,” replied Number One as she picked up her tea for a sip.

Number One smiled and asked. “Now Christopher, what is that suppose to mean?”

“I believe the captain is paraphrasing the famous ‘Et tu Brute’ Earth play called Julius Caesar” said Spock from his observing position over Number One shoulder.

“I’m sure Number One know that Lieutenant Spock, I expect she was trying to obtain the context,” sad Yeoman Colt from her position over the Captain shoulder.

Spock raised his left eyebrow.   Pike moved his Queen it to the Bishop attack level and swung the attack level forward. “I’m sure Number One you know why, and I believe that is Checkmate,”

“Indeed it is Captain,” said Spock “An risky strategy but effective performed,”

Number One just sat back in her chair and said “Well played Christopher, Seem you still know how to best me,”

“Only at 3D Chess, Number One, anyway if you excuse me I’ve keep Yeoman Colt waiting long enough, we best go do those crew reports now, I’m sure Mister Spock can give you a good game in my stead,” said Pike,

“Of course Captain,” said Number One.

Pike nodded to his officers and led Yeoman Colt out of the mess hall.   “Number One, I have a question, if I may?” asked Spock

“Of Course Lieutenant, what do you wish to know?” answer Number One.

“Why you let the Captain win?” said Spock.

“O you notice that? Well because after Talos four, he seem to be suffering from doubts, and that is the last thing we need from our Captain, therefore allowing him to think he best me, should restore his confidence in himself,” answer Number One.

“Another risky strategy, but I find you logic sound, now may I offer you a proper game?” asked Spock.

Number One showed a rare smiled “Of course Spock,” answer Number One. 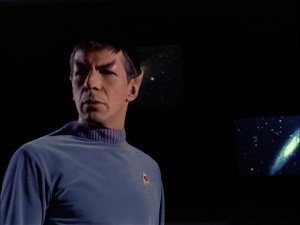 So there we go. Hope you enjoy that little slice from the beginnings or at least saw why I don’t do the Pike Era more myself. as yes i didn’t go into the Trinity as far as I like but isn’t that always the way?

Anyway pictures are as always courtesy of Trekcore.

Till next time Safe Trekking.